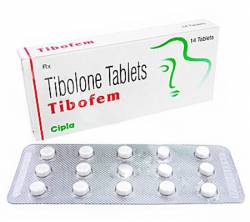 Tibofem is a synthetic hormone drug, which is fairly non-selective in its binding profile, acting as an agonist at all five of the Type I hormone receptors. It is used mainly for treatment of endometriosis, as well as hormone replacement therapy in post-menopausal women. Tibofem has similar or greater efficacy compared to older hormone replacement drugs, but shares a similar side effect profile. It has also been investigated as a possible treatment for female sexual dysfunction, although it is unclear whether the benefits in this application justify the known risks of the drug.

Dosage - 2.5 mg day. The tablet needs to be swallowed with the some people water or other drink, it is preferable at the same time day. Improvement attributes in general occur within several weeks, but optimum results received when therapy is continued within at least 3 months. In the recommended dosage, tibolone can be used continuous for longer the periods.

The women testing a natural menopause should begin treatment with Tibofem later 12 months after that their natural bleed last. If Tibofem is taken more likely than this, irregular menstrual bleeding can take place. In a case the artificial menopause, treatment with Tibofem can immediately begin switching from usual therapy of replacement of a hormone (HRT) in women with a uterus which change from an estrogen - only drug, withdrawal bleeds, should be caused before start Tibofem. At change from consecutive HRT treatments of drug with Tibofem should begin the ambassador progestogen the stage has been finished. At change from continuous - incorporated HRT drug, treatment can begin at any time. If it is wrong vaginal bleeding - the reason to switch from usual HRT, it informed to investigate the reason of a bleeding before start Tibofem.

Tibofem warnings and precautions: pregnancy; known or suspected tumours dependent by a hormone; cardiovascular or cerebrovascular disorders for example thrombophlebitis, thrombo-embolic processes or a history of these conditions; not diagnosed vaginal bleeding; serious disorders of a liver.