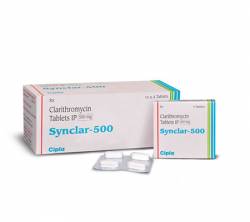 Synclar is a type of macrolide antibiotic which works for many bacterial infections, including skin infections, infections of the respiratory tract (upper or lower) and lungs, such as pharyngitis, pneumonia, sinusitis and others. Patients have also been treated with it for Lyme disease and otitis media (middle ear infections). In some cases, it may even be used to rid a type of bacteria known as helicobacter pylori from the gut in patients suffering from peptic ulcers. This medicine has antibacterial action, and it works by attacking susceptible bacteria and inhibiting their ability to synthesize essential proteins. Resulting from this, the microorganisms are unable to multiply and are instead eliminated by the immune system.

The exact dosage needed depends mainly on the condition being treated and the opinion of the doctor in charge of treatment. Adults may be instructed by their doctor to take 250 mg, twice per day, and treatment may last for as long as deemed necessary by the doctor (usually 7 to 14 days). Swallow the tablet whole alongside a glass of water, and remember that doctors generally advise patients to keep taking it for the entire prescribed period of time, unless told otherwise.

Synclar may cause unwanted side effects such as: headache, diarrhoea, indigestion, strange taste, disruption of sleep.

Synclar  may cause severe liver problems in some cases, and patients should consult their doctor immediately if any symptoms of liver problems are noticed.

In some cases, colitis may be caused by antibiotic treatment. Should you suffer from severe or bloody diarrhoea during or after treatment, ensure that you consult your doctor straight away. Seek immediate emergency medical attention if you suffer an allergic reaction. Symptoms to watch for, which may be indicative of a reaction, include skin rashes, hives, swelling of the face or limbs, trouble breathing and trouble swallowing.