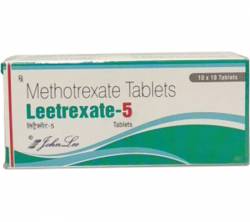 Leetrexate is an antimetabolite drug and an antifolate drug. It is commonly used in treatment of various types of cancer, ectopic pregnancy and autoimmune diseases. It can be used in treating of rheumatoid arthritis, psoriasis, lupus, sarcoidosis, Crohn's disease and a number of other conditions. It was originally developed to be used in chemotherapy and it is still used in treating breast, neck and head cancers, leukemia, lung cancer, lymphoma and other types.

Leetrexate is both an antifolate and antimetabolite drug. It interferes with the growth of various cells in the body, especially those that reproduce quickly. These include bone marrow cells, skin cells and cancer cells. For purposes other than chemotherapy, Leetrexate is used usually when other treatments have failed because it is a very potent medication.

Leetrexate has to be taken exactly as prescribed. The correct dosage has to be used. Taking Leetrexate in dosages larger than the prescribed and more often than prescribed can lead to a lethal outcome. The drug should be used regularly to achieve the best results. You should refill your prescription before you run out of it. Leetrexate may lower the blood cells levels and your doctor will want to check your blood and the rest of your system regularly to make sure you are alright.

The dosage will vary greatly depending on the treatment you are undergoing, your medical history and a number of other factors. Listen to the doctor and adhere to their prescribed regimen without any deviations. An overdose on Leetrexate can be lethal. Make sure to seek emergency medical help if the overdose is suspected. Call your doctor and ask them what to do if you miss a dose.