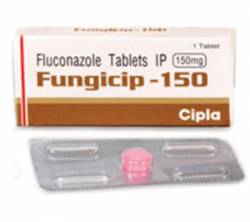 Fungicip is used to struggle with the biological affection candida fungi and attendant these pathology diseases. The advantage of the Fungicip in the reaching of the fast effect but if the disease is neglected, it is needed to be ready that it will be necessary to use Fungicip from time to time during frequent relapses of thrush. An absolute plus of Fungicip is that it may be used even before getting results of the appearance of the causative agent of the disease.

Fungicip is safe and it may be used during the oncological diseases and AIDS. The use in the pediatric use is possible but the medicamental therapy should be made under the supervision of the attending doctor.

The main active component of Fungicip is Fluconazole. The action mechanism of Fungicip consists in the inhibition of the synthesis of sterols in the cells of fungi. It influences on the cell membrane of fungi increasing its permeability. As a result of this there is a slowdown of the growth and replication of the affected cells.

Fluconazole inhibits the development of a lot of fungal infections including the generalized forms of candidosis in the setting of immunodepression. Due to the fast pharmacological effect the patients feel better and all symptoms of the severe fungal diseases disappear.

Fungicip should be used until the complete disappearance of the clinical symptoms of the disease. According to this each patient is prescribed the individual dosage depending on the age of the patient and form of the fungal infection. During the genital candidosis one tablet of Fungicip is prescribed once. To prevent the vaginal candidosis Fungicip should be used within 6 months, 150 mg once per month. For mycosis patients are prescribed 150 mg per week within 1-2 months. For severe forms of the fungal infections the dosage regimen may be adjusted and prescribed patients 50 mg every day, within 2-4 weeks. The maximally allowed daily dose of Fungicip is 400 mg but the use of such high doses is possible only under the supervision of the doctor, according to the medical rates.

For frequent relapses of candidosis it is allowed to take Fungicip for the complete destruction of the causative agents of the infection and reduction of the disease symptoms.

In some cases the use of Fungicip may cause the side effects. The most recorded side effects are headache, muscular cramps, dyspepsia, and dizziness. These side effects are observed within the first days of the drug use and do not require the doctor’s intervention.

In case of the appearance of the severer side effects such as dysfunction of the liver, or allergic reaction, it is necessary to inform the doctor about it. Perhaps, the patient has to reduce the daily dose, or replace this medicine to the identical one but with other active component.