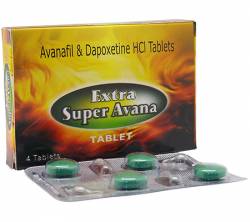 Extra Super Avana helps to achieve, sustain, and prolong penile erection. It significantly reduces premature ejaculations. It increases the sense of control, and sexual satisfaction in men. Extra Super Avana has a quicker onset of action, and starts acting within 15 minutes of uptake.

Extra Super Avana acts by inhibiting a specific phosphodiester ase type 5 of an enzyme which is found in various body tissues, but mainly in the corpus cavernosum of penis. The enzymatic inhibition by Extra Super Avana leads to prolonged and sustained penile erection.

Dapoxetine acts by inhibiting the serotonin transporter, leading to increased serotonin's action at pre, and postsynaptic receptors. By regulating the central nervous system activity the sense of control increases, and premature ejaculations are significantly reduced.

Side effects: changes in vision or sudden vision loss; ringing in your ears, or sudden hearing loss; chest pain, pounding heartbeats or fluttering in your chest; pain, swelling, warmth, or redness in one or both legs; shortness of breath, swelling in your hands or feet;  feeling light-headed, fainting; or penis erection that is painful or lasts 4 hours or longer.