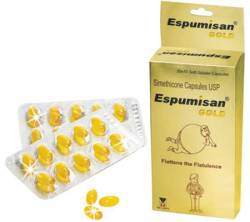 Espumisan Gold Capsules is the cure for swelling and a feeling of heaviness in the abdomen. Enhanced formation and accumulation of gas in the stomach and intestines in the form of small bubbles foam leads to unpleasant symptoms such as bloating and feeling of heaviness in the abdomen. This is the reason for colic in infants, which are common complaints encountered in about one third of infants. Colic begins several days after birth and continue until about the third month. They are located both in infants fed with breast milk, and in those fed with formula. Colic usually starts at the same time of day, usually in the afternoon and evening, with a sudden, intense, prolonged crying.

Espumisan Gold Capsules reduces the surface tension of gas bubbles break and retail bubble foam. Released this way gas can be absorbed by the intestinal wall.

Espumisan Gold Capsules applies: in all diseases accompanied by increased formation and accumulation of gas in the gastrointestinal tract (flatulence), accompanied by symptoms such as discomfort, swelling, feeling of heaviness and fullness in the abdomen; for colic in infants; an excessive ingestion of air, as well as intake of certain foods and beverages, leading to increased flatulence (beans, lentils, cabbage, carbonated beverages); for heart complaints as a result of upward movement of the diaphragm due to accumulation of gas in the gastrointestinal tract; in preparation for abdominal imaging (X-ray, ultrasound, etc.) and as an adjunct to contrast medium for double-contrast radiography; poisoning with detergents