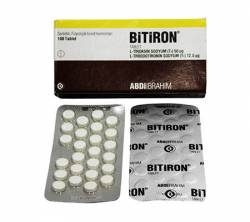 Bitiron is a synthetically derived thyroid hormone replacement preparation. It consists of Levothyroxine sodium (Thyroxine, T4) and Liothyronine Sodium (Triiodothyronine, T3) in a 4 to 1 ratio by weight. Bitiron was developed when it was believed that serum levels of both T4 and T3 were maintained by direct thyroidal secretion. It is now known that the thyroid gland secretes approximately ten times more T4 than T3 and that 80% of serum T3 is derived from deiodination of T4 in peripheral tissues. Administration of Levothyroxine alone is sufficient for maintaining serum T4 and T3 levels in most patients and combination hormone replacement therapy generally offers no therapeutic advantage. In fact, administration of T3 may result in supratherapeutic levels of T3.

Thyroid hormone drugs are natural or synthetic preparations containing T4 or T3 or both. T4 and T3 are produced in the human thyroid gland by the iodination and coupling of the amino acid tyrosine. Bitiron is a synthetic preparation of T4 and T3 in a 4:1 weight-based ratio. These hormones enhance oxygen consumption by most tissues of the body and increase the basal metabolic rate and the metabolism of carbohydrates, lipids and proteins. Thus, they exert a profound influence on every organ system in the body and are of particular importance in the development of the central nervous system.

The hormones, T4 and T3, are tyrosine-based hormones produced by the thyroid gland. Iodine is an important component in their synthesis. The major secreted form of thyroid hormone is T4. T4 is converted T3, the more active thyroid hormone, by deiodinases in peripheral tissues. T3 acts in the body to increase basal metabolic rate, alter protein synthesis and increase the body's sensitivity to catecholamines (such as adrenaline). Thyroid hormones are essential for proper development and differentiation of all cells of the human body. T4 and T3 regulate protein, fat and carbohydrate metabolism to varying extents. The most pronounced effect of the hormones is in altering how human cells use energetic compounds. The thyroid hormone derivatives bind to the thyroid hormone receptors initially to initiate their downstream effects.