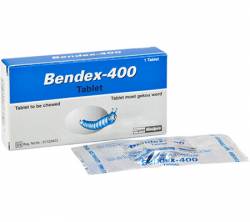 Bendex is known to be teratogenic and embryotoxic in animals. Bendex should not be taken by pregnant women at any stage of their pregnancy or by women who are likely to become pregnant, during or shortly after the course of therapy.

It has been noted that leucopenia has occurred when used for periods longer than recommended.

Bendex is given orally, usually as a single dose, in the treatment of single or mixed intestinal nematode infections. The usual dose for adults and children ages 2 years or over with ascariasis, hookworm infections, or trichuriasis is 400 mg as a single dose. In strongyloidiasis, 400 mg is given daily for 3 consecutive days: this may be repeated after 3 weeks if necessary: a similar schedule is used for taeniasis when mixed with other worm infections. Giardiasis (dose in children over 2 years of age): A single 400 mg daily dose for five days.

Side effects: gastrointestinal disturbances and headaches have been reported. Since albendazole is poorly absorbed from the gastrointestinal tract at the usual therapeutic doses, side-effects have generally been restricted to gastrointestinal disturbances, such as transient abdominal pain and diarrhoea, and have tended to occur in patients being treated for heavy intestinal infection. However, adverse effects have been reported more frequently with the high doses and have included allergic reactions, raised liver enzyme values, alopecia and bone marrow depression which can be severe.