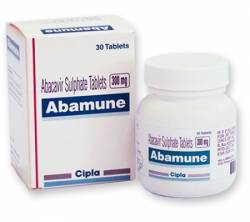 Abamune is used as part of a regimen of anti-HIV medications to treat HIV-1. One tablet is comprised of Abacavir Sulphate equivalent to 300 mg of Abacavir. Abamune must be augmented with other antiretrovirals to prevent the progression of HIV-1 to AIDS.

The recommended oral dose for HIV-1 infected adults is one 300 mg tablet of Abamune twice daily along with other antiretroviral medications. Contrary to many anti-HIV drugs, no dosage adjustments are necessary for patients with renal complications. Patients between the ages of three months to 16 years can take 8mh/kg twice daily. Those with mild hepatic impairment defined as having a Child-Pugh score of 5 to 6 should only take 200 mg twice every day. Abamune can be taken without regard to food.

Patients hypertensive to Abacavir and patients with moderate to severe hepatic impairment should not take Abamune.

Abamune may cause other side effect. Inform your doctor immediately if you experience changes in your health after starting Abamune.

If hypersensitivity to Abacavir cannot be ruled out, Abamune should be discontinued permanently. Anyone taking Abamune who is susceptible to liver disease may have a greater risk for hepatotoxicity and lactic acidosis. Extra precaution is necessary when prescribing Abamune to elderly patients. There is a possibility of cross resistance when taking Abamune in combination with other NRTIs.

Abamune has not been documented to affect cytochrome P450 isoforms, so the probability of Abamune interacting with medications that are metabolized through these pathways is insignificant.

No known antidote for Abamune has been discovered, and it is unknown if Abamune can be removed through dialysis. Do not take more Abamune than prescribed.